Why Rappers Should Be Skeptical to Invest in Esports

Hip-hop artists have actively followed the investing wave in esports, but there are looming challenges that the high-growth industry will face. 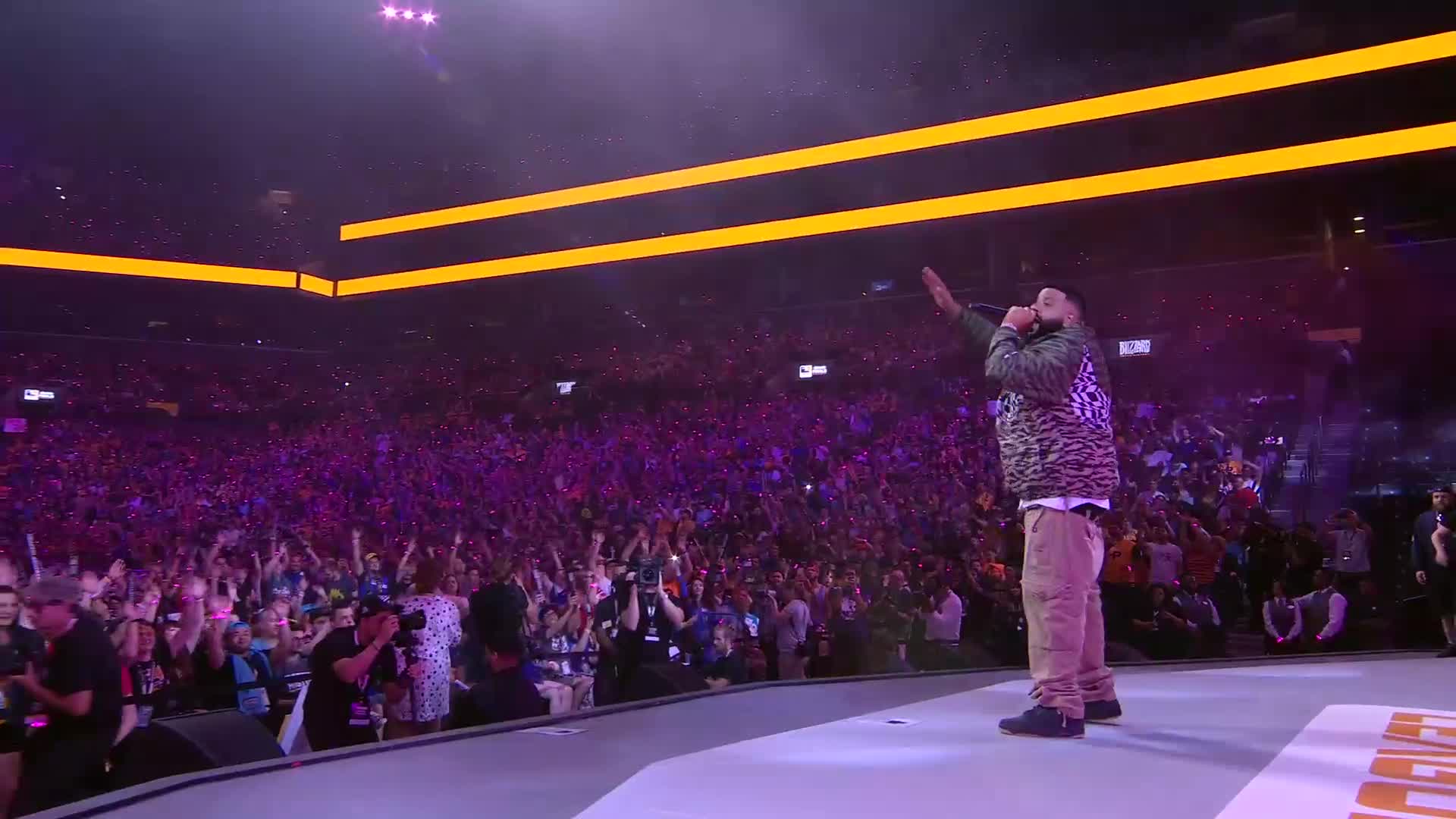 DJ Khaled, the opening act at the 2018 Overwatch League Finals.

Esports has seen a wave of interest and investment from hip-hop. In the past year, Diddy invested in a high school esports organizer, Drake became a co-owner of an esports team management group, and Lil’ Yatchy became a consultant for an esports collective. Their deals follow the wave of capital that’s poured into competitive gaming. With esports tournaments, team ownership, distribution deals, and sponsorship dollars, there’s money flowing through all parts of the ecosystem.

Yet despite the excitement, there’s room for skepticism. Last week, Kotaku released a deep dive analysis on a potential esports bubble. They pulled up the CarFax, named names, and reported that the entire industry rests on a rocky foundation of inflated numbers and fraudulent data. After reading the 8,000-word article, all I could say was “well, damn.”

Separately, some artists have pivoted their business models to rely on the active audience in esports via streaming distributors like Twitch. It’s a questionable strategy that’s further compounded by the data integrity issues.

There’s still plenty of opportunities for rappers to make their money in esports and gaming, but the overstated numbers should shift attention toward the stabler opportunities that exist.

Hip-hop’s been waiting for this moment

The partnership between gaming and hip-hop is nothing new. In 2003, Def Jam and Electronic Arts teamed up for Def Jam Vendetta—a WWE-inspired wrestling game where Def Jam rappers fought crime bosses (can’t get more early-2000s than that). The game was a hit that launched two sequels and inspired a slew of copycats, like 50 Cent: Bulletproof.

In an interview last year with okayplayer, Kevin Liles—then president of Def Jam—reflected on the impetus for the beat-em-up action game:

And when the gaming industry started putting music inside of games I was wondering, “We’re licensing all these songs to the game company — how come we’re not making games?”

This quote is straight from the ownership ideology that dominated hip-hop culture at the time. I wrote about this in January in How Jay Z and Damon Dash’s Split Still Impacts Hip-Hop:

But not too long ago, hip-hop was an entrepreneur’s haven. When Roc-a-Fella was at its peak in the early 2000s, hip-hop consumer brands had taken off. Phat Farm, Ecko, and Sean John were everywhere. A bunch of artists launched energy drinks too. It was hip-hop’s “dot.com” era. Damon Dash was in his element. Soulja Boy would have thrived back then too.

Back then, video game development was the highest level of attainable ownership. Console manufacturing was an unrealistic opportunity for most new entrants. And since online gaming culture was still nascent, there was no broader ecosystem to build on.

Today, the dynamic has flipped. Esports now offers opportunities in gaming that the past generation would have lusted over. But today’s artists have approached it differently than their predecessors would have. Instead of launching their own esports leagues and organizations, current stars strike deals with existing organizations.

While these partnerships limit the risk of starting a venture from the ground up, they are closely aligned with current challenges in the esports landscape. It’s a concern that any investor should have about this space.

The biggest data issue lies in how viewership stats are reported. According to the Kotaku report, one of the most commonly cited “facts” is that last year’s League of Legends World Championship drew more viewers than the Super Bowl. Now, Nielsen does not count views under six minutes (there’s a Drake-Views-6 joke somewhere in there but I’ll spare you). But on Twitch, a stream immediately counts when someone is on the front page. Additionally, some esports streams have been fraudulently embedded in other sites where users are not even aware that a livestream is happening.

There are several issues here. First, viewership and streaming numbers will never be consistent. For instance, YouTube keeps track after 30 seconds, which differs from both Nielsen ad Twitch. But the call to action is not for consistency across platforms. It’s for those who report on this data to take these differences into account. Unfortunately, these details get lost—especially when the companies recording these stats have a vested interest in the industry’s success!

Also, the economics behind the esports teams and leagues are highly questionable. There’s a sizable gap between esports player salaries and team revenue. From TheStreet:

“Everyone is focused on making the scene bigger, not smarter,” [Frank Fields, a sponsorship manager at Corsair] said, describing a current reality of multimillion-dollar investments in Esports teams going disproportionately to player salaries, while sponsorship revenue has lagged. “My biggest theory is that [investors] are trying to be the next Los Angeles Lakers…but them putting money into the scene is affecting it in a negative way.”

To make Esports more attractive, and more profitable, to a broader range of stakeholders, expenses like salaries need to be better tied to revenue rather than speculative investment, he said. In addition, more innovation is needed to create independent revenue streams for the teams that are the industry’s main draw.

Most of these challenges are in conflict with the heightened investment activity we currently see. But these challenges also impact the growing number of artists who are starting to rely on the esports ecosystem to elevate their careers.

Last year, Detroit rapper Danny Brown released an EP exclusively on Twitch. A few years ago, Alabama rapper YBN Nahmir gained popularity through Xbox Live by streaming himself spittin’ freestyles while playing Grand Theft Auto. He’s since gone on tour with G-Eazy and is one of the biggest advocates of gaming’s ability to put rappers on.

The potential is exciting, but building a business that relies on a sole platform is a risk. If any changes happen to that platform, then the artist’s business model is in jeopardy. I wrote about this risk last month in Hype Williams Was Too Good At His Job.

These challenges—data, economics, and specialization—are troublesome, but they aren’t dealbreakers. There are still healthy business opportunities to be had.

The best path forward for hip-hop is actually a call back to the entrepreneurial spirit of the 2000s. There’s a clear need in esports for sustainable businesses. We still see that same energy in Meek Mill and Soulja Boy who have launched their own mobile games and consoles. But there’s room for more rappers to join them.

Most of the industry’s challenges are most impactful to esports team and leagues. The individual celebrity gamers, who earn money by livestreaming their gameplay, are fine. Last year’s Fortnite game between with Drake, Travis Scott, and top gamer Tyler “Ninja” Blevins was a big moment. After Drake’s appearance, Ninja’s revenue growth from streaming increased $250,000 per month. Other rappers can replicate this with other popular gamers. They can make financial agreements to share revenue, split sponsorship dollars, or even read ads during livestreams (like a podcast episode).

While Drake’s investment in esports organization 100 Thieves is reliant on esports teams and leagues, the company has focused on building its lifestyle brand. This is a smart move since esports culture and apparel are real, tangible things. Regardless of the data issues, there are still thousands of esports gamers filling arenas to watch championship matches and rock the latest gear. There will always be money to be made in fashion.

There’s also an opportunity to charge consumers directly to watch individual gamers. The concept has a polarizing history in esports, but the future is inevitable. A digital streaming provider that’s been active in livestreaming events, like Tidal, can pursue this route. This opportunity has likely caught the attention of subscription video streaming services like DAZN and Bleacher Report Live. Both are focused on sports outside of the “big four,” so esports is a logical next step.

Meanwhile, the artists to watch out for are those following YBN Nahmir’s footsteps and using esports as their meal ticket to stardom. They need to stay active on multiple platforms, both in and out of gaming. A platform like TikTok could make sense in the short-term. While TikTok is not esports, the skills required to build an audience are transferable.

The circular nature of hip-hop’s business mentality is intriguing. Partnerships are still the current wave, but gaming is one of the few places where the old mentality might be better off. But that’s expected. If the underlying foundation has issues, it’s a great time for new entrants to come through.

That doesn’t mean we need another Def Jam Vendetta though! The rumor mill thinks that it’s in the works. One one hand, it’s ridiculous to bring a game like that back. Been there, done that. But on the other hand, is it any less ridiculous than what’s currently happening in esports?

Get smarter on hip-hop. Join the music executives and business leaders who get Trapital in their inbox.