J. Cole Is Still Making Millions From a $1 Concert

J. Cole’s fanbase is notoriously loyal. If the 33-year-old rapper’s talent is ever questioned, his fans have talking points ready. He’s an acquired taste. His lyrics are so relatable. It goes over the head of “mumble rap” fans. There’s no room for nuance. Their self-congratulatory takes may be overbearing (and have now spawned countless internet memes), but J. Cole and Dreamville—his record label—deserve credit for building an incredibly devoted following.

In 2013, Jay Brown, CEO and co-founder of Roc Nation, suggested that J. Cole—the label’s first signed artist— host a concert series where he only charged fans $1 to attend. Back in 2007, Cole sold his first mixtape The Come Up for $1 at colleges. The mixtape’s song “Dollar & A Dream” spoke to the realities of seeing his dreams come true. The $1 tour was an opportunity to tie those themes together and give back to his fans.

The North Carolina rapper, who was gearing up for his sophomore studio album Born Sinner, took Brown’s advice and hosted a nine-city Dollar & A Dream Tour in June 2013. Tickets were sold at small concert halls on a first-come, first-serve basis. Each venue location was undisclosed until J. Cole tweeted it out a few hours before the show. Based on the high praise and reception, the Dreamville team brought the tour back in 2014 and 2015. Each year, Cole exclusively performed songs from his older mixtapes, The Warm Up and Friday Night Lights, respectively. Much to Cole’s surprise, fans knew every word of his old songs.

J. Cole made no money from ticket sales (proceeds from each $1 ticket were donated to The Dreamville Foundation) but it has already paid off. Since 2015, his traditional concert tours have made nearly $60 million. His fourth studio album, 4 Your Eyez Only, went platinum in four months, and his latest album, KOD, has already broken streaming records on Spotify and Apple Music.

Most rappers would love a fanbase like Cole’s. There’s a cost associated with building a strong following, but for J. Cole, it was time and money well spent. The goodwill created with fans turned them into fervent customers who proudly support J. Cole.

“Honest, vulnerable, confident. Wasn’t on no commercial shit. This is the shit [these fans] are gonna remember forever.”
– Rihanna, backstage at a Dollar & A Dream Tour show, 2015

Free concerts are nothing new in music. In the late 60s, the Grateful Dead built one of the strongest fanbases in music by hosting free concerts to generate demand. The legendary rock band claimed it was not part of a devised strategy, but it worked in their favor. In 2015, “Deadheads” still traveled to sold out football stadiums to watch the group perform. Roc Nation and Dreamville knew that “free” shows would help Cole build a strong following too.

J. Cole’s career was at a pivotal point in 2013. His 2011 debut studio album Cole World: The Sideline Story performed well, but left the rapper conflicted. Nas said that he was disappointed Cole turned to radio hits—referencing Cole’s song, “Work Out”. This led Cole to make the song “Let Nas Down” on Born Sinner. The rapper had to decide if he was still ‘Jay Z’s protege’ or ready to chart his own path.

Despite J. Cole’s pending decision, he knew his day-one fans would love the $1 concert. Thankfully, his Dreamville team was ready to make it happen. 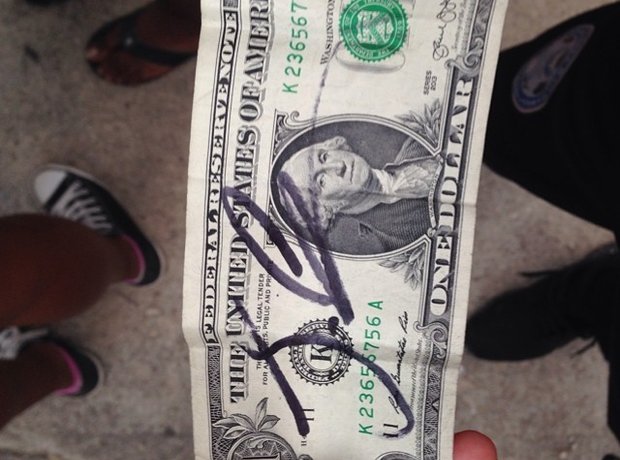 A fan showing off a $1 bill signed by J. Cole at a Dollar & A Dream Tour stop (via Instagram @that_kid_agu)

“This shit is an ill ass idea. It’s dope cause a lot of times we get away from this. The core fans will be mad when you’re blowing up cause they know where you were at. That’s good appreciation.”
– Kendrick Lamar, backstage after a Dollar & A Dream Tour show, 2014

Dreamville, now a joint venture with Interscope Records, has established itself as a boutique brand focused on building quality connections with fans. CEO and co-founder Ibrahim “Ib” Hamad has made the label’s goals clear. “If we can use our platform to give new artists an opportunity to share music that’s going to touch others because it touched us, that’s all that matters,” said Hamad in an interview with Takeover. The team has maintained this mentality long before J. Cole reached his current level.

The Dollar & A Dream Tours made 19 stops in three years: nine in 2013, six in 2014 (including Raleigh, NC—which Cole had to argue for), and four in 2015. According to J. Cole’s 2014 interview with Noisey, each Dollar & A Dream show cost six-figures to run. If we assume $150,000 per each of the 19 stops, that’s almost $3 million in total. Based on estimates, each small concert venue had an average of 3,000 fans. Across 19 stops, that’s nearly 60,000 day-ones who had their dreams come true. If we spread the $3 million across 60,000 fans, Cole created lasting connections with each fan for only $50. These connections become lifelong relationships—translating to future concert, album, and merchandise sales.

Many artists and companies follow the 1,000 True Fans theory: to earn $100,000, you only need 1,000 fans who consume your work enough to equal $100 in profit per fan per year. J. Cole might have converted 60,000 day-ones into true fans from the Dollar & A Dream Tour alone. And considering the impact from his other work, that number is likely higher.

In 2015, J. Cole started reaping the benefits. Dreamville spent most of the year promoting Cole’s third studio album, 2014 Forest Hills Drive. This album was the turning point for J. Cole’s career. No radio singles in advance, no industry tracks, only three weeks notice before its release, all J. Cole. And yes, he sold enough albums to go double platinum with no features.

The Dollar & A Dream Tours showed that J. Cole’s true fans would support him if he stayed true to his roots. They proved it by coming out for the Forest Hills Drive Tour—a three-act 63-city tour that sold nearly 575,000 tickets and earned $20.4 million worldwide. He also recorded a live album from the tour and released an HBO documentary Forest Hills Drive: Homecoming. J. Cole was the highest-earning rapper of 2015.

He made the right decision. 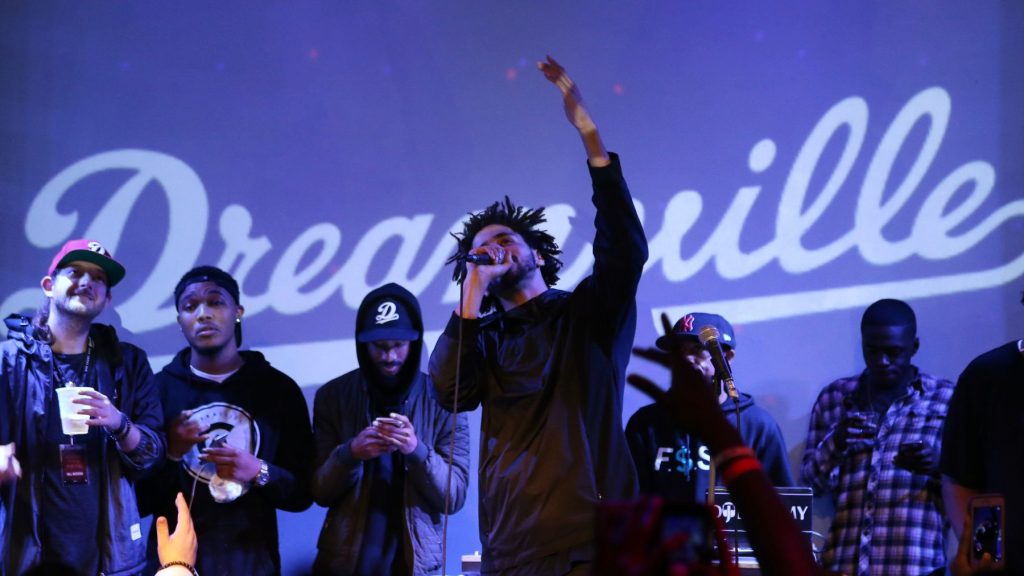 In summer 2015, a devoted but exhausted J.Cole squeezed the third Dollar & A Dream Tour between the second and third acts of the Forest Hills Drive Tour. “It was stressful,” said Cole in the Homecoming documentary. “Not cool having people overheat, dealing with the cops, sleeping overnight, crowd getting restless. We didn’t plan right, we didn’t up the ante or evolve.” KC Saney, the tour manager, also shared his skepticism, “Either we totally change it, or retire it.”

That was the last Dollar & A Dream Tour. But J. Cole has done free concerts since, most recently at the 500-person capacity Gramercy Theater in New York City on April 18 —two days before KOD dropped. Even as his platform grows, he still finds more true fans.

Jay Z once called himself rap’s Grateful Dead. Beyonce’s husband still draws crowds at arenas, but J. Cole—the former Jay Z protege—is the rapper who’s following is most similar to the old rock band’s fanbase. J. Cole fans are hip-hop Deadheads with social media accounts. Both groups formed a subculture of tag lines, irrational takes, and pride themselves in their respective movements. Other rappers may be more popular than J. Cole, but is there another rapper more likely to command a strong concert showing 30 years from now? Probably not.

Will J. Cole do another Dollar & A Dream Tour? Maybe. Other rappers have tried to replicate the tour but were unsuccessful. The Dreamville team has the formula. It’s their call if they up the ante and bring back J. Cole’s career-defining concert.

But let’s be careful what we wish for. That would mean 20,000 more people reminding us that J. Cole went double platinum with no features.

How Apple Music Fell Behind in Digital Streaming

Join thousands taking hip-hop to the next level